Sunday October 16th is UN World International Food Day and to mark it no2gm are offically launching their anti-GM campaign. Renowned chef Clodagh McKenna will open the event at the Dún Laoghaire-Rathdown Food Market in The People’s Park, Dún Laoghaire at 12 noon.

no2gm is a non-political, voluntary, not-for-profit organization made up of citizens and organizations who wish to protect our environment and keep Ireland free from genetically modified organisms (GMOs).

The launch will take place from 12 noon and will be a fun and informative family event. There will be an information stand, a puppet show, talks by local producers and gm free food tastings. The event is free and all are welcome to attend for more information see www.no2gm.com

Dr. Sinead Neiland IOA Chairperson, Desmond Thorpe, Sean Clancy and Grace Maher all met with Minister McEntee on Thursday 29th of September at Agriculture House. The meeting was extensive and covered a number of important issues. The main focus was on how best to work together to develop organic farming in Ireland to meet and fulfill the demand for Irish organic food both at home and abroad.

A press release was issued by the Department of Agriculture following the meeting;

Shane McEntee TD, Minister of State at the Department of Agriculture, Food and the Marine discussed a range of opportunities and issues in the Organic Sector with a delegation from the Irish Organic Association (IOFGA). The meeting took place this morning at the Department offices in Dublin.

Having discussed a wide range of topics including education, GM, CAP Reform and the Organic Farming Action Plan, the Minister emphasised that even in these difficult times, there is real potential for growth in the Organic Sector. While the Minister noted that the value of the organic market in Ireland had decreased from €124m in 2009 to €100m at end of February, 2011, he highlighted the fact that an additional €25m approximately is earned through direct organic sales viz farmers markets, box schemes, farm gate sales and individual websites.

“Consumer confidence in the integrity of our organic produce is vital. I believe that the five Organic Control Bodies in Ireland play a critical role in safeguarding the integrity of Irish Organic Produce and therefore its market potential”, the Minister of State said. “There are lucrative markets both at home and abroad for Irish Organic produce and I urge farmers to avail of the opportunities that clearly exist”.

The Irish Organic Association has been active in the field of organic certification for more than 25 years. Their activities are accredited by the Irish National Accreditation Board according to EN 45011 (ISO 65), which is the international standard for certification. IOA have been approved in Ireland to inspect and certify to Council Regulation (EC) 834/2007, which came into force on 1 January 2009, replacing Council Regulation (EEC) No. 2092/91.

In the home market, up to 70% of organic fruit and vegetables are imported. The European organic food and drink market, valued at €18.7bn in 2009 has forecasted revenues of €30.5bn for 2016.

This year Bord Bia have partnered with TV3 to promote National Organic Week. You will find lots of features about organic food and interviews with IOA producers. Ralf Haslam of Mossfield Organic Cheese was the featured producer at the launch of National Organic Week on Ireland AM. To view some of the clips follow the link to the TV3 website http://www.tv3.ie/videos.php?video=39941&locID=1.65.74&date=2011-09-12&date_mode=1&page=1&show_cal=2&newspanel=&showspa

Please note you will require Adoble Flash Player 10.3 to download the clips.

Watch out for Orla Clancy from Clanwood Farm on the Midday Show on Wednesday 14th!

Congratulations  to all IOA winners at the National Organic Food Awards  announced on September 12th.  There was a 100% increase in the number of entrants to the awards this year to well done to all. The IOA winners were

Despite advancements in food legislation and labelling what we often end up with are consumers who are often confused about what they are buying. This is also the case with organic food. The most frequently question organic producers are is what exactly is organic food?

In the EU the term organic is legally binding when it comes to food so if it says organic on the label then it must carry a certification logo such as IOFGA’s. If it is prepacked then it must also contain the EU organic logo. That is the customers guarantee that it has met the organic standards.

Attached please find below a copy of the IOA organic certification logo in black and white and a copy of the EU organic logo in green.

IOA are the largest certification body in Ireland and are responsible for certifying the organic provenance of its members produce and the IOA symbol indicates that a product has met the highest standard of organic integrity. IOA also works to inform the public about the benefits of organic food and to support the development of organic food production in Ireland. 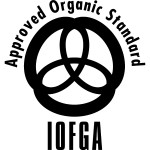