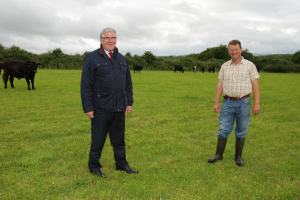 Tom Hayes, TD. Minister of State at the Department of Agriculture, Food and the Marine, today announced the opening of a new TAMS II Scheme: the Organic Capital Investment Scheme. An indicative allocation of €8m is being made available for this Scheme over the full RDP period.

Announcing the opening of the Scheme, Minister Hayes said “I am delighted to launch this very important Scheme which I believe will prove to be of invaluable assistance to both new and existing organic operators in the development and expansion of their respective enterprises. This Scheme provides support for a wide range of investment items which reflect the evolving needs of our dynamic Organic Sector.”

Minister Hayes made this announcement during a visit to the farm of Mr Michael Seymour, Sheepwalk Farm, Borriskane, Co. Tipperary. Mr Seymour, an organic farmer since 1997, is an organic beef and lamb producer involved in direct selling and in the operation of a box scheme.

The Organic Capital Investment Scheme is one of the new Targeted Agricultural Modernisation Schemes (TAMS) to be launched as part of the new Rural Development Programme 2014 – 2020. The Scheme is open to all organic farmers who meet the general eligibility criteria, offering a standard rate of aid of 40% on investments up to a ceiling of €80,000. For qualifying young organic farmers who meet the specific eligibility criteria, the standard rate of aid is 60% on investments up to a ceiling of €80,000. The Scheme is co- funded by the European Agricultural Fund for Rural Development (EAFRD).

The total allocation for the various on-farm investment Schemes planned under TAMS II is €395m over the course of the programme.

The Minister emphasised that the objective of the Scheme is to facilitate the development of the Organic Sector so as to ensure a regular supply of high quality organic produce to meet the demand which exists in the market place.

Minister Hayes added “this Scheme is a key support measure which aims to enable and encourage organic farmers to develop, expand and modernise their enterprises to their full potential and avail of the market opportunities that clearly exist.”

All applications must be made on-line, either by the farmer or by an advisor authorised to act on his or her behalf. Copies of the Organic Capital Investment Scheme terms and conditions are available on the Department’s website :

The online application system will go live on Friday 31st July. The first tranche of applications will run for three months, closing towards the end of October.